Here is a short recap:

I did have to mix up my going out or staying home pattern a little bit here because it’s my husband’s birthday month! I made a small list of things I thought he would like to do and told him to pick one. He choose to go camping at Lynx Lake in Prescott, AZ! He also added to the idea and we brought our bikes.

Our first stop on our date was to a nice little sandwich spot called “Speed’s Hangar Deli” for lunch. It was WWII themed and all of the sandwiches were named after WWII planes. 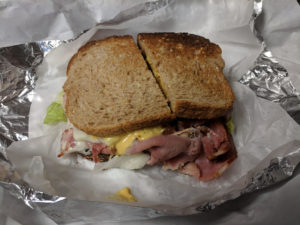 After lunch,  we headed over to the lake and found a camp spot. We set up quickly so we could go on our bike adventure.

I should say that I haven’t ridden a bike in almost 10 years. Jumping back on and trying to ride the rocky and twisty single track trail down a little mountain/hill was really hard for me, but I still enjoyed it. I did have to walk my bike most of it because of how challenging it was for me and because it was on the edge of the steep little mountain, and I’m afraid of heights. We walked down to the water and stayed there for a little while before riding the street uphill, back to our camp spot for dinner.

After we had dinner, we went jeeping on another little trail until it got dark. We saw a really pretty stream on the way that I had to take a picture of! 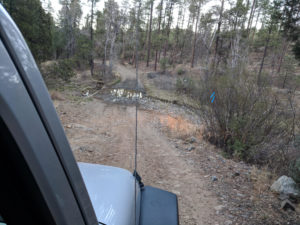 Lastly, we had to end the night with s’mores around the fire.

The next morning, Vadim got up a little early and went on a harder bike trail, while I got to sleep in. I needed that extra hour of sleep. I finally had a full, uninterrupted, 8 hours of sleep! Well… I think I actually ended up with 9 hours 😄

We had breakfast when Vadim got back, and then went for a hike back to the lake. I was done with my bike!

There is another little trail that goes around one side of the lake that we walked half of before turning back to pack up our camp.

It wasn’t a very long camping weekend, but it was nice getting away from the real world for a while.💜 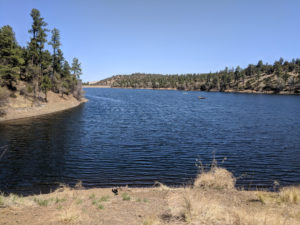 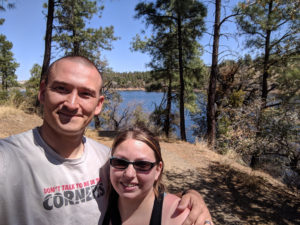